› Ruch-Gallie R, Hellyer PW, Schoenfeld-Tacher R, et al. Survey of practices and perceptions regarding feline onychectomy among private practitioners. J Am Vet Med Assoc. 2016; 249(3):291–298.
This survey was conducted in 2014 and published in 2016. The survey was based on questions sent by email to members of the Veterinary Information Network (VIN), which were answered anonymously online by 10.4% of its members.

› Wilson DV, Pascoe PJ. Pain and analgesia following onychectomy in cats: a systematic review. Vet Anaesth Analg. 2016;43(1):5–17.
This publication constitutes a systematic review of existing, published studies that evaluated pain associated with onychectomy in cats. Twenty papers were evaluated in total, in which 12 analgesics were evaluated, with nine studies involving a direct comparison of analgesic agents. The goal of the review was to assess the efficacy of the analgesic therapies administered to attempt to identify optimal analgesia strategies for onychectomy. Criteria to measure pain varied from limb use to various pain scales to behavior assessment, with many studies highlighting the difficulties associated with assessing pain in cats. Physiological variables, such as heart rate, respiratory rate, and body temperature, were not found to be useful in assessment of analgesic efficacy. Additionally, none of the studies administering rescue analgesia reported reassessment of these patients outside of the time points of the study. No clearly superior analgesic treatment was identified, no single agent was found to be effective, and insufficient evidence exists to support the success or failure of a multimodal analgesic approach.

2. Behavior Changes in the Declawed Cat

› Martell-Moran NK, Solano M, Townsend HG. Pain and adverse behavior in declawed cats. J Feline Med Surg. 2018;20(4):280-288.
This was a retrospective cohort study looking at 137 declawed and 137 non-declawed cats. Within each group, 88 were owned cats, and 49 were shelter cats. Cats with a previous history of trauma or congenital or developmental conditions were excluded from the study. The study assessed patients for behavior changes, including aggression, house soiling, and barbering, and also the presence or absence of back pain. The study also looked at the prevalence of P3 fragments in declawed patients and the relation of these to the four parameters. Onychectomy technique was taken into consideration. Declawed cats were found to have an increased risk of back pain (odds ratio [OR] 2.9), house soiling (OR 7.2), biting (OR 4.5), and barbering (OR 3.06). The presence of remaining P3 fragments further increased the risk of back pain and adverse behaviors. The age of the cat was not related to any of the outcomes. The authors concluded that onychectomy increases the risk of undesirable behaviors and may increase the risk for back pain regardless of surgical technique.

› DePorter TL, Elzerman AL. Common feline problem behaviors: Destructive scratching. J Feline Med Surg. 2019;21(3):235–243.
This publication is a review which looks at scratching behavior in cats. It explores the natural behavior of scratching and why cats scratch. The review examines treatment approaches for destructive scratching and provides tips for the use of appropriate scratching substrates, which substrates to use, and how to select them for each individual cat. The authors also discuss the use of synthetic feline pheromones to direct scratching behaviors. The review covers techniques to discourage the use of unwanted scratching on inappropriate substrates without the use of punishment, which can increase anxiety and frustration. Onychectomy is presented, with the growing concern that the procedure is a significant welfare issue, which is coming under increased scrutiny as the long-term negative consequences of onychectomy are revealed. Alternative techniques to reduce damage to property from unwanted scratching behavior are presented, including application of plastic nail caps. A number of supplementary materials have been made available, including a valuable owner handout describing 'Strategies for reducing scratching by your cat.'

› Cloutier S, Newberry RC, Animal ACA, et al. Behavioural signs of postoperative pain in cats following onychectomy or tenectomy surgery. Applied Animal Behaviour Science. 2005;92(4):325–335.
This study examined relative degrees of acute pain in cats postoperatively, comparing onychectomy, digital flexor tenectomy (DFT), and sham surgery (control) patients. All three groups underwent anesthesia, surgeries were performed by the same surgeon, and bandages were placed regardless of study group. The authors hypothesized that compared to onychectomy, DFT would be less painful in the immediate postoperative period. Pain was assessed starting 0.5 hours after surgery and continued for 35.5 hours postoperatively. Before and after surgery, criteria assessed as indicators of patient comfort, discomfort, or pain included: groom body, groom with forepaw, groom bandages, shake forepaw, wipe forepaw, stand/sit, lie on sternum, lie on side, manipulate toy with forepaw, hide under blanket, and drink. These criteria were assessed by an experienced, blinded observer. The authors concluded that bandages contribute to increased forepaw wiping, shaking, and lying on side, even in control cats. They concluded that tendonectomy patients had similar pain signs to those cats that had been declawed, thus indicating that the procedure is no less painful.

› Romans CW, Gordon WJ, Robinson DA, et al. Effect of postoperative analgesic protocol on limb function following onychectomy in cats. J Am Vet Med Assoc 2005;227(1):89–93.
This prospective study directly compared limb function in cats post-onychectomy treated with either transdermal fentanyl, intramuscular butorphanol, or intraoperative topical bupivacaine. Limb function was determined by measuring peak vertical force (PVF), vertical impulse (VI), and PVF ratio at time periods before surgery and at 1, 2, 3, and 12 days after surgery. Patients in the study underwent unilateral onychectomy of the left forelimb only, allowing assessment of the right forelimb as a control. In all three groups, PVF, VI, and PVF ratios were significantly decreased compared to baseline values on the day after surgery. The narcotic treatments resulted in less impairment of limb function compared to intraoperative topical bupivacaine on day 2 postoperatively. Compared with baseline measurements, and regardless of analgesic protocol, cats continued to show significantly reduced limb function 12 days postoperatively. Measurements were not conducted beyond 12 days.

› Holmberg DL, Brisson BA. A prospective comparison of postoperative morbidity associated with the use of scalpel blades and lasers for onychectomy in cats. Can Vet J 2006; 47(2):162–163.
These studies compared post-onychectomy patient limb function in patients undergoing laser or scalpel onychectomy. Limb function was determined in the first study by measuring peak vertical force (PVF), vertical impulse (VI), and PVF ratio with patients having either declaw by laser or declaw by scalpel technique. In the second study, cats were monitored for lameness by trained but blinded observers, with one paw declawed by laser and one paw declawed by scalpel. In both studies, there were days postoperatively that the patient or paw subjected to scalpel declaw showed reduced limb function or increased evidence of lameness. However, both studies also documented days when no differences were noted between different study groups (patient or paw), with both groups suffering similar limb dysfunction or lameness. The studies did not look beyond 12 days (Robinson) and ten days (Holmberg), with limb dysfunction noted at 12 days for both groups and normal gait noted at ten days for both paws.

Why are these publications relevant?

4. Long-Term Concerns in the Declawed Cat

› Cabon Q, Plante J, Gatineau M. Digital flexor tendon contracture treated by tenectomy: different clinical presentations in three cats. Journal of Feline Medicine and Surgery Open Reports. July 2015.
These studies identified a unique and under-diagnosed negative sequela of onychectomy: digital flexor tendon contracture. All five patients were presented for thoracic limb lameness of variable duration, with onychectomy having been performed as early as three months and up to years prior. The patients were found to be painful, with mild to severe tension of the P1-P2 forelimb digits and reduced ability or inability to extend this joint. On further assessment, negative sequelae were found to include soft and bony tissue changes. Tendon histopathology revealed reactive fibroplasia with well-differentiated fibroblasts, small-caliber blood vessels, and thin collagen fibers. Radiographically, the joint angle of P1-P2 was frequently noted to be less than 90°. Successful treatment for all five patients involved tenectomy of the superficial and deep (Cabon) or deep digital flexor (Cooper) tendon(s), which resulted in release of the contracture and resolution of lameness.

Why are these publications relevant?

› O'Hagan, BJ. Neuropathic pain in a cat post-amputation. Aust Vet J. 2006; 84(3):83-86.
This case report describes a hindlimb amputee patient that presented clinical signs consistent with neuropathic or phantom limb pain (PLP) 38 days postoperatively. The patient had suffered a traumatic sciatic nerve injury 42 days prior, with subsequent limb amputation. The patient's clinical signs included hiding and urine house soiling. The patient was also described to be holding his stump in the air as though trying to shake the amputated limb. This pattern worsened over eight days, with the patient becoming lethargic and unable to take only a few steps before pausing to attempt to shake the stump and falling over. Treatment with amitriptyline did not resolve the concern. The patient was admitted for treatment for PLP, starting with induction to an initial anesthetic state, followed by constant rate infusion of morphine, lignocaine, and ketamine. This was continued for a total of 36 hours with ongoing transmucosal-buprenorphine and oral amitriptyline for 21 days. At discharge, the clinical signs had resolved and did not recur after 14 days, 21 days, or ten months post-amputation.

› Ellis A, van Haaften K, Protopopova A, Gordon E. Effect of a provincial feline onychectomy ban on cat intake and euthanasia in a British Columbia animal shelter system. Journal of Feline Medicine and Surgery. September 2021.
This study sought to determine whether the 2018 provincial ban on onychectomy surgery by the College of Veterinarians of British Columbia (CVBC) resulted in an increase in cat relinquishment for destructive behavior. It has been speculated by many that banning onychectomy will lead to an increase in relinquishment due to destructive scratching behavior. The authors of this study also examined for any changes in overall feline surrender intake and euthanasia within the British Columbia shelter system, as well as changes in average length of stay in the shelter system following the ban. The authors reviewed records from 36 months prior to the ban (n=41,157) and 36 months after the ban took effect (n=33,430). The records were examined for total intake numbers, euthanasia, and length of stay. Proportions of cats and kittens surrendered for destructive scratching, and proportions surrendered with an owner-directed request for euthanasia were compared.

Destructive scratching behavior was an uncommon reason for surrender overall, and there was no significant difference in the number of cats surrendered for destructive scratching before and after the ban on onychectomy. The data revealed a lower proportion of owner-requested euthanasias after the ban, although no direct causal relationship for this change was determined. There was no significant change noted in the total number of cats surrendered, the shelter live release rate, or the average length of stay before and after the ban.

The authors concluded that the ban on elective onychectomy did not increase risk of relinquishment to shelters for destructive scratching, nor did it significantly impact shelter euthanasia or length of stay. 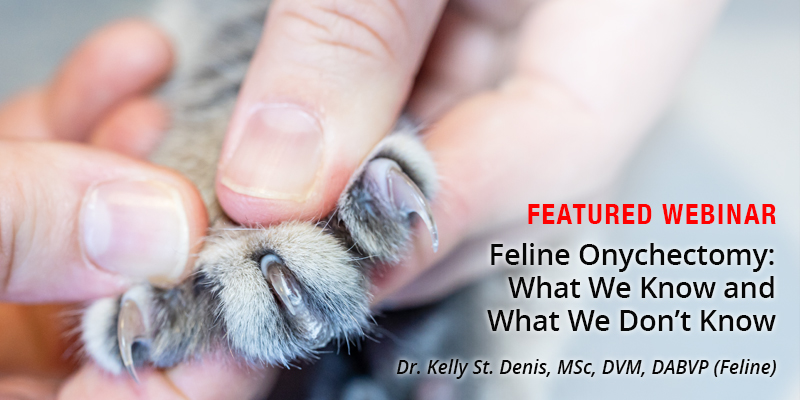 Feline Onychectomy: What We Know and What We Don’t Know
Kelly St. Denis, MSc, DVM, DABVP (Feline)
Onychectomy has always been a controversial topic, but over the last decade, a large push to end this practice has revived the controversy. Declawing is an emotionally charged issue, leading to much discussion on social media sites, in social settings, at conferences, and in the clinic. This presentation will provide a review of the current understanding of the surgical procedure known as ‘declawing.’ We will discuss the factors behind the desire for declaw, as well as the shift that is diminishing that demand. Surgical, short, and long-term risks will be reviewed. Given that much has yet to be learned about the long-term consequences of feline onychectomy, the presentation will also review applicable literature from other species undergoing similar surgical procedures.